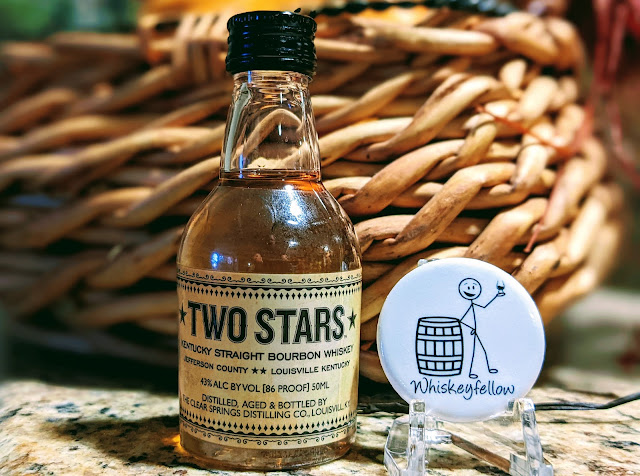 “Two Stars is the same thing as Buffalo Trace.”

If you’ve ever set foot in a Total Wine & More store and interacted with one of their salespeople, you’ve likely heard those exact words. I know I have – often – and at various locations around the country.

What is Two Stars?  It is a Kentucky Straight Bourbon bottled at 86°, whereas Buffalo Trace is packaged at 90°. And that, my friends, is all the information you need to understand that these two are not the same Bourbon.

Two Stars carries no age statement; it sells for about $17.99 for a 750ml bottle and is “exclusive” to Total Wine & More except in states where exclusivity is not allowed. Even without an age statement, because it is straight Bourbon and lacks an age statement, we know it spent at least four years in oak.

Despite my discontent with Total Wine & More, I don’t allow that to affect my opinions on its Spirits Direct (Total Wine’s house brand) whiskeys. I take them as they come. Some are good; others are not. What I do know is that a lot of people make fun of Two Stars. Before today, I’d never tasted it. But, when there is a 50ml bottle available for $1.49, you #DrinkCurious.

I will get to my tasting notes in a moment, but first I’ll point out that throughout my years of whiskey reviewing, I’ve discovered some of what people joke about is unfounded. Remember, everyone’s palate is different, and there’s my #RespectTheBottomShelf hashtag for a reason.  Now, let’s get to it!

Appearance: Poured neat into my Glencairn glass, Two Stars Bourbon presented as pale straw. It created a medium ring around the neck and released quick tears that fell back to the pool.

Nose: Corn and caramel were the first scents I picked out. Then, I smelled circus peanuts. There was a hint of toasted oak. When I drew the air into my mouth, I found more circus peanuts.

Palate:  The mouthfeel was lightweight combined with some significant ethanol burn. Corn and vanilla greeted the front of my palate. Ethanol formed the middle. The back was oak and clove.

Finish:  A too-long ethanol-heavy finish was mixed with oak tannins.

Bottle, Bar, or Bust:  I let this whiskey sit about 20 minutes before I began my journey to ensure it had enough time to breathe. I’ve done many barrel picks of Buffalo Trace Bourbon in my life. I’ve never tasted anything this young, harsh, and unpleasant from that line. Two Stars is not the same as Buffalo Trace, even on Buffalo Trace’s worst day. Don’t let Total Wine’s staff tell you it is; if they do, you let them know Whiskeyfellow said this Bourbon is a Bust. Cheers!

Posted by Whiskeyfellow at 12:00 AM 5 comments: 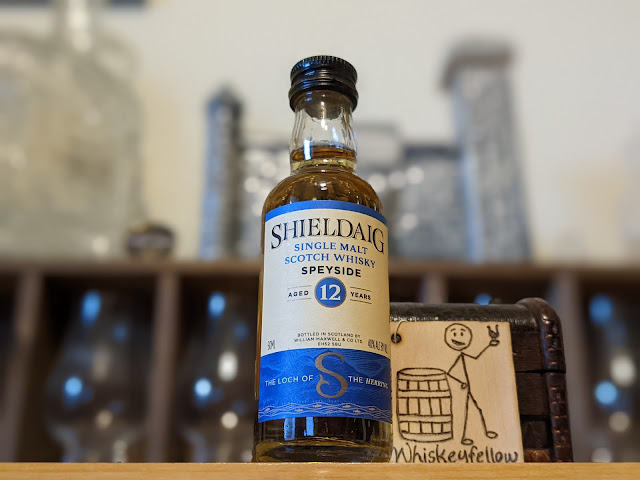 Shieldaig is not an actual distillery. That’s not unusual in the Wonderful World of Whisky – most of us know that brands source barrels and then slap their label on the bottle. We call the folks that do that an Independent Bottler. Some independent bottlers have earned incredible reputations, they charge a tidy sum for what they market, and they’re worth every penny. Others are far less skilled, and even if they sell at rock-bottom prices, you still feel ripped off after you’ve tried it.

Shieldaig is part of the Spirits Direct program of Total Wine & More. Some Spirits Direct offerings are house labels – stuff exclusive to the store. Others, such as Angel’s Envy, fit in some other way.

Today we’re going to explore Shieldaig Single Malt Scotch Whisky. The label states it is a dozen years old, it comes from the Speyside region, and is bottled in Scotland by William Maxwell & Co., Ltd. It is bottled at 40% ABV (80°), and you can buy a 750ml from Total Wine for about $23.00.

Now, Shieldaig doesn’t disclose who the distiller of this bottle is, but we can do some extrapolation. William Maxwell & Co., Ltd. is a legitimate independent bottler, sourcing barrels from various well-respected and coveted distilleries and owning about 42 some-odd labels. That company is a subsidiary of Peter J. Russell. Who is Peter J. Russell? The founder of Ian MacLeod & Co., which happens to be the 10th largest Scotch whisky company globally.

Ian MacLeod & Co. owns two distilleries:  Glengoyne, from the Highland region, and Tamdhu, from Speyside.  A single malt whisky means that everything comes from a single distillery. In theory, Ian MacLeod could purchase many barrels from an undisclosed distillery to keep the Shieldaig brand going. It is more likely and more logical that Tamdhu is the source.

I picked up a 50ml taster from Total Wine for $2.99 in Minnesota. Did I do okay, or should I have snagged a full 750ml? The answer to that question lies in the tasting. Let’s #DrinkCurious and find out.

Nose:  It was easy to pick out apple, pear, vanilla, and honey notes. With a bit more effort, English toffee was also present. As I drew the air into my mouth, raisin and apple danced across my tongue.

Palate: The mouthfeel was watery and medium-bodied. Honey and vanilla were on the front, while flavors of butterscotch and oak took up the middle.  On the back, astringent overwhelmed anything else that might have been there. No matter how many sips I attempted, nothing changed.

Finish:  The finish continued with that medicinal quality and featured toasted oak, vanilla, and malt. It also left tannin on my tongue that wouldn’t go away.

Bottle, Bar, or Bust:  The nose convinced me this came from the Tamdhu Distillery. So did the front and middle of the palate. The back and finish, however, made me second-guess the whole thing. I’ve had Tamdhu single malts, and none had the medicinal Band-Aid quality to them. I realize some folks enjoy that note; I can tolerate it and usually dismiss it, but not when it is so dominant. I went into this review hoping I discovered another opportunity to #RespectTheBottomShelf, but this wasn’t it. I simply cannot give anything but a Bust rating for it. Cheers! Every so often, I let my excitement over finding something new get in the way of my better senses. When perusing the aisle of a Total Wine & Liquor in Minneapolis, I found a 50ml taster of Winchester Extra Smooth Rye.  I believe it was $1.99, so what did I have to lose?

When I got back to my whiskey library and updated my inventory, my heart sank. I saw that the distillery was TerrePURE.  What’s TerrePURE?  Well, it has created a method using sound waves to hyper-age whiskey. I’ve been down this road with them before, once with their OZ Tyler Bourbon, and again with the OZ Tyler Rye. Here are my two ratings:

As it turns out, TerrePURE moved operations to North Charleston, South Carolina, so perhaps OZ Tyler recognized its brand was being ruined and kicked them out. Or, it could have been something else.

Here I sit, glass in hand, trying to remind myself that I have a #DrinkCurious lifestyle and everyone deserves a second (or third) chance.

Winchester Rye is aged six months in new oak. It doesn’t say “charred,” although you can assume as much to hit the rules with the TTB. It is bottled at 90°, and a 750ml can be acquired for $24.99 at Total Wine. The brand wants to let you know that in 2015, it won a silver medal from the San Francisco World Spirits Competition.

Does that win translate for the hope that there was some improvement? I can divulge that I lived through the experience because you’re reading the review.

Appearance:  Poured neat in my Glencairn glass, Winchester Rye presented as the color of gold. It formed a thick rim that made a curtain to fall back to the pool.

Nose:  I had to double-check the bottle to ensure that it didn’t say Listerine on it somewhere. A giant blast of menthol and mint struck me in the face. Dill and green oak followed after many attempts to get past it. Nervously, I took the air into my mouth, and the menthol and mint permeated all over.

Palate:  At this point, Mrs. Whiskeyfellow was humming to herself. I asked what was up (to delay the inevitable), and she indicated she enjoyed the show and the sounds I was making and pointed out that I hadn’t even tasted it yet. Well, that only wasted a few additional seconds. I sucked it up and took a taste. The mouthfeel was thin, and the palate was painfully young with mint and citrus. I sipped it again, hoping this was simply palate shock, and I was incorrect.

Finish:  Miracles do happen. The finish was about as short as I’ve ever experienced. There was a hint of caramel, then more mint and citrus.

Bottle, Bar, or Bust: The TerrePURE process is still horrific as this godawful Rye proves. Usually, I suggest what may improve things on a whiskey I don't like. There's no salvaging this. Long story short, Winchester Extra Smooth Rye is the worst thing I’ve tasted in 2021 and is a Bust.

Posted by Whiskeyfellow at 12:30 AM No comments: