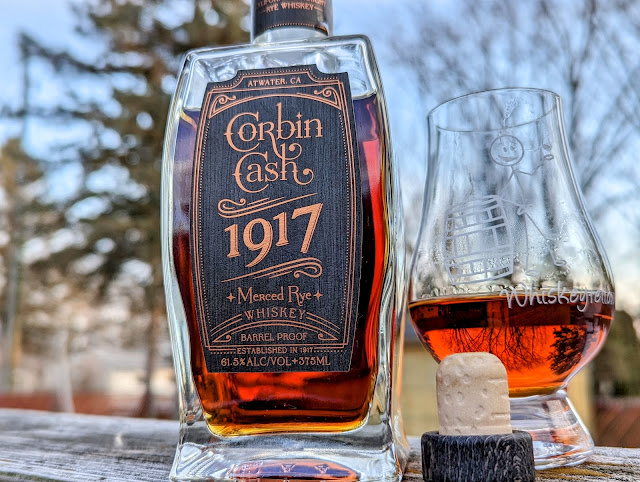 In Atwater, California, there exists a distillery named Corbin Cash. It was founded in 2017 by fourth-generation sweet potato farmer David Souza. The distillery is a grain-to-glass operation that relies on sustainable farming and produces whiskey, gin, vodka, and sweet potato liqueur.

“For nearly 100 years, we’ve been lucky to have farmland in California’s beautiful San Joaquin Valley, where rich soil and endless sunshine create the perfect conditions for raising the best sweet potatoes. When David John Souza took the reigns of the family business, he set out to discover new ways people could enjoy this delicious food. A love of good times, plus a dose of entrepreneurship, led him to create an ultra-premium spirits company called Corbin Cash, named after his son Corbin Cash Souza.” – Corbin Cash Spirits

Today I’m reviewing Corbin Cash 1917 Barrel Proof Merced Rye. The 1917 part of the whiskey’s name refers to the founding of the Souza farm three generations prior. But what, exactly, is Merced Rye?

Merced Rye is a cover crop. As stated in the quote above, the Souza family farm grows sweet potatoes. The cereal grain protects the ground during the winter as it smothers weeds while absorbing unused nitrogen in the soil. That, in turn, helps naturally fertilize the next crop of sweet potatoes. That’s a nifty system that leads to sustainable farming practices.

It begins with a mash of 100% of that estate-grown Merced Rye, which is said to be ultra-rare. I’m neither a farmer nor do I play one on television, so I’ll accept the claim at face value. It aged up to six years in new, charred American white oak barrels, although it carries no age statement. The whiskey came unfiltered from the barrel and packaged at 61.5% ABV (123°) in 375ml and 750ml bottles, priced at about $65.00 and $100.00, respectively.

The backstory is cool; I love that the brand is named for his son, and I have a ton of respect for farmers for various reasons. But all that matters, in the end, is how the whiskey tastes, and the way we figure that out is to #DrinkCurious. Before I get there, I want to thank Corbin Cash for providing me with this sample in exchange for a no-strings-attached, honest review.

Appearance: I sipped this Rye neat from my Glencairn glass. It was a dark mahogany liquid that created a thin, sticky rim. What was unusual was that the rim was narrow; some droplets hung just below it. It took some time, but eventually, they crawled their way back down to the pool.

Nose: Rich cherry notes escaped the glass as I allowed it to oxidize. As I brought the whiskey to my face, the cherries remained and smelled like Queen Anne Cordial Cherries: chocolate, sugar, and all. I also discovered smoked peppers. When I drew the air through my lips, my mouth filled with cherry and caramel.

Palate: Smoke and baking spices floated across the front of my palate on an oily texture. Cherry, apricot, and pipe tobacco flavors took over the middle, while charred oak, cinnamon, and leather covered the back.

Finish: Long and lingering, the cinnamon, charred oak, pipe tobacco, and apricot held on as long as possible.

Bottle, Bar, or Bust: A lot was going on with this American Rye. I’ve had 100% rye mashbills before, but I don’t recall them tasting anything like Corbin Cash 1917. What should be sticker shock is forgotten as you lose yourself in the sipping experience. I liked everything about this whiskey, it hit all the right things, and I believe you’ll agree that it deserves my Bottle rating. Cheers!