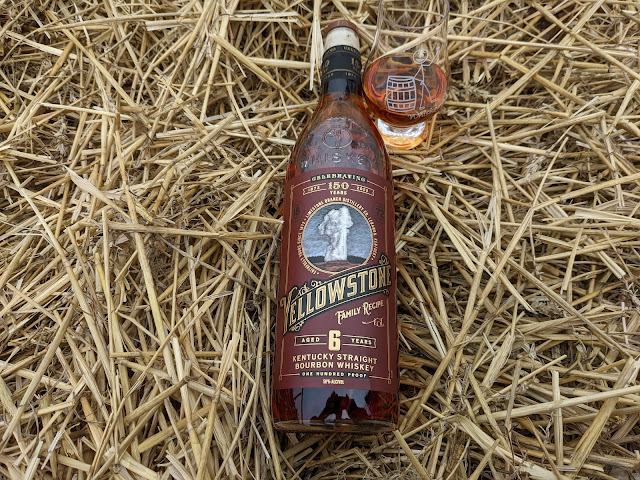 Limestone Branch Distillery has been slowly coming into its own. Brothers Stephen and Paul Beam are seventh-generation descendants of the renowned Jacob Beam. In 2010, the brothers decided to write their own story, and a year later, they broke ground on the distillery in Lebanon, Kentucky. In 2012, they fired up the still and got to business.

These Beams are known for producing whiskey brands Minor Case and Yellowstone.  Those started with sourced whiskeys, but now its distillate is ready to rock and roll. It is always exciting to see (and taste) what happens when a distillery releases its own, but what’s even more fascinating is when something special happens.

Here’s where we get into a backstory, and if you’ve been reading my reviews for any time, you know that I take most of them with a large spoonful of salt. Especially when you discover your great grandpappy's recipe hidden behind a cabinet. That’s kinda-sorta but not precisely what’s happened with the Beams.

In this instance, their grandfather, Guy Beam, kept a notebook with recipes. That doesn’t seem too far-fetched. Stephen and Paul located a yeast jug belonging to their great-grandfather, Minor Case Beam. They took the DNA from that yeast and cloned it. That yeast compounded with the recipe is what the Beams describe as the original 1880s mashbill for Yellowstone Bourbon.

Limestone Branch has just released Yellowstone Family Recipe, a limited-edition annual release of this Bourbon. The mashbill is undisclosed, but it aged six years in new, charred oak. It is packaged at 100°, and there will be only 6000 bottles available in a slow rollout. The retail price is $69.99.

Wyoming and Montana get this allocation first about right now (April). If you’re left scratching your head why the Beams would choose Wyoming and Montana for a launch, that is to honor the 150th anniversary of Yellowstone National Park. Shortly after that, the distillery in Lebanon and select Kentucky retailers will get the next rollout. A nationwide rollout will occur in August, with a second in the fourth quarter of 2022.

Thanks to Limestone Branch, I’ve had a preview sample of this Bourbon in exchange for a no-strings-attached, honest review. Let’s #DrinkCurious and see how the Beams did.

Nose: The first aroma to hit my olfactory sense was spiced nuts. A blast of caramel was next, followed by dense oak and vanilla cream. Tobacco and nougat were easily identifiable when I brought that air into my mouth.

Palate:  There was what I could describe only as a “reverse Kentucky hug” that started boldly and fell off almost immediately, leaving an airy texture. On the front, I tasted lime, hazelnut, and vanilla. The middle offered nougat, almond, and sweet tobacco, while the back featured oak, clove, and black pepper.

Bottle, Bar, or Bust: I will give the Brothers Beam credit; Yellowstone Family Recipe is unusual in a good way. Something reminded me of Jim Beam Repeal Batch, and because of that, I poured myself a dram of that immediately afterward. There are some similarities, particularly in the mouthfeel and the nutty flavors, but nothing else. So, did I enjoy Yellowstone Family Recipe? Yes. Is it worth $69.99? Also, yes. I don’t know that I would play the secondary market game with it, but it has earned by Bottle rating for its stated price. Cheers!

Fall is what's generally thought to be the time when special release Bourbons come out. That's the perception, but in reality, these limited editions are released all year long - it just depends on what you're after.

Since 2017, I've been reviewing the annual release of Yellowstone Limited Edition. Sourced by Limestone Branch, brothers Steve and Paul Beam do unique things with what they have.  For 2020, they've done something that, if not unique, is at least very unusual. They took a seven-year Kentucky Straight Bourbon and finished it in Armagnac casks.

Armagnac is my favorite brandy, although it is considered by some to be Cognac's ugly stepsister. Both have to be completely made in their respective regions of France. The varietals differ. Cognac must contain at least 90% Ugni Blanc, Folle Blanche, and Colombard grapes. Armagnac is made from Baco 22, Colombard, Old Blanche, and Ugni Blanc varieties. Cognac is made on a pot still, Armagnac on a column. Cognac has a lighter nose and is thought to be less flavorful than Armagnac.
According to Steve Beam:

Armagnac is a rustic, full-bodied spirit that contributes dark fruit notes, complimenting the vanilla notes in the Bourbon. Just like a chef adds spices to enhance flavors, I believe cask-finishing should be similar, where it simply enhances the natural flavor in the Bourbon.

There is no transparency as it pertains to whose distillate this is, but Luxco (Limestone Branch's parent company) has a long-standing relationship with Heaven Hill. As such, you can draw your own conclusions. Like the previous Limited Edition releases, this one weighs in at 101° and costs $99.99.  It is important to note that, unlike other annual releases from distilleries, Limestone Branch has held this price for several years.  There are a total of 5000 cases, and for a change of pace, this Yellowstone comes in a different, more eye-catching bottle.
Before I get to the review, I'd like to thank Luxco for providing me a sample of its 2020 release in exchange for a no-strings-attached, honest review. Time to #DrinkCurious.
Appearance:  In my Glencairn glass, this Yellowstone presented as true, unadulterated amber. It created a thin rim but fat, heavy legs that raced back to the pool.
Nose:  Aromas of sweeter fruits started things off. Atypical of the kind I normally find, these come from the melon genre: honeydew and canteloupe. Vanilla bean and chocolate were next, followed by a touch of sweet berry. When I breathed the vapor through my lips, the honeydew stood out.
Palate:  Offering a substantial body, things commenced with a blast. Vanilla from the Bourbon was first and took up the entire front of my palate. Mid-palate, dried cherry, raisin, and prunes made me forget entirely about the vanilla. Then, on the back, the fruit changed to citrus peel mixed with very dry, French oak.
Finish:  The mid-palate fruits returned for a second appearance and spotlighted the Armagnac influence. Cocoa powder, coconut, and French oak stuck around for an enduring finish that ran for several minutes. There was also a tingling sensation left behind on the hard palate.
Bottle, Bar, or Bust:  I enjoy Cognac-finished Bourbons and was damned curious what Armagnac would do for one. Now I have that answer. If the Yellowstone 2020 Limited Edition is any indicator, this is something other brands should pay attention to. The Brothers Beam did something lovely here, and this earns my Bottle rating. Cheers!
My Simple, Easy-to-Understand Rating System
Posted by Whiskeyfellow at 6:00 AM 2 comments: 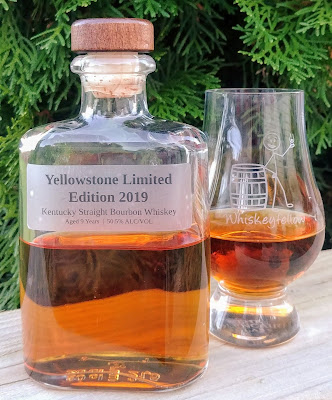 Luxco, the parent company of both Limestone Branch and Lux Row Distillers, has been on a good run in 2019. They've released several limited-edition whiskeys that have proven very interesting. Limestone Branch is headed by brothers Stephen and Paul Beam, descendants of JW Dant, the original distiller of the Yellowstone brand. Limestone Branch is doing its own distilling now but still relies on sourced whiskeys for its portfolio.

I've reviewed the 2017 and 2018 Yellowstone Limited Editions. I was not overly impressed with the 2017 LE and rated it a Bar.  The 2018 LE blew me away and it took that coveted Bottle rating. When Luxco sent me a sample of the 2019 LE, I have to admit I was excited.

The 2019 version is a blend of 9- and 12-year Bourbons.  One could assume, based upon Luxco's historical reliance on Heaven Hill for sourcing whiskey, that these Bourbons come from the same source.  The 2018 version had some of Limestone's distillate, but none of what they have is old enough to make this bottling.  That's definitely a curiosity, but I digress.  Limestone Branch produced 12,500 101° bottles with a retail price of $99.99.  Because we don't have a firm grasp on the distiller, the mashbill is unknown but must, by law, be at least 51% corn. I suspect rye and, obviously, malted barley.

I want to thank Luxco for sending me this sample of Bourbon for a no-holds-barred, honest review. And now, let's get to it.

In my Glencairn, Yellowstone appears as a brassy chestnut amber.  It left a very thin rim and thicker, fast legs that dropped down the wall and into the pool of liquid sunshine.

The most obvious aromas were brown sugar and cinnamon toast.  Think of the cereal Cinnamon Toast Crunch and that pretty much nails it. Underneath those was a blend of citrus, light oak, and cocoa.  This was almost like sitting down for breakfast.  When I inhaled through my lips, there was heavy, dark fruit and vanilla.

The initial sip was thin, oily and coating, and the first flavor to hit me was plum. As the liquid worked its way across my palate, I discovered a lovely combination of dark chocolate and thick caramel. Then, way at the back, a mix of oak and cocoa led to a finish of white pepper, dry oak, and dark chocolate.  That finish was lasting and warmed my throat.

Bottle, Bar or Bust:  There is so much going on with this year's release and it is very well-balanced. Flavors seem to naturally blend with one another as they worked across the palate. Everything seemed to go right and I can't think of a negative unless I wanted to whine about the c-note pricetag. But, we're at the point in Bourbon and Rye where that is becoming less and less unusual.  Like 2018, the 2019 Yellowstone LE is going to snap up that Bottle rating.  Cheers!
Posted by Whiskeyfellow at 6:22 PM No comments: