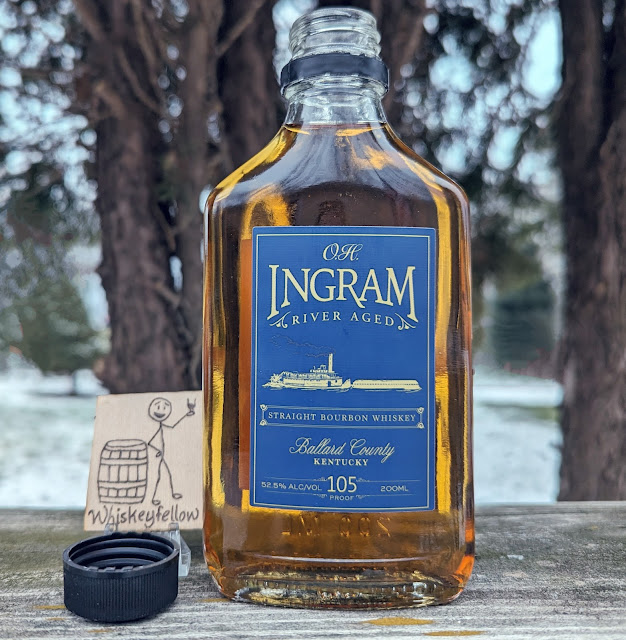 So many American distillers are trying to differentiate themselves from one another. Some do barrel finishing, some get creative with a mashbill, and play with char levels and barrel staves. Others include exposing the whiskey to artificial seasons, blasting music at the barrels, or sticking them on a boat.

There is one brand that is famous for aging whiskey on boats: Jefferson’s. Its Ocean range sends barrels around the world, with the idea that the rocking sea, stormy weather, and ocean air would impact the whiskey inside. I’ve reviewed AO Come Hell or High Water from Pilot House Distilling, which puts barrels on fishing vessels in the Pacific Northwest.

But I’ve never heard of aging whiskey in a rickhouse floating on the Mississippi River – until today.

About 150 years ago, O.H. Igram owned an Eau Claire, Wisconsin lumber company that sent logs down the Mississippi River. His grandson, O.H. “Hank,” expanded the family business to include river barges. Then, O.H. Ingram III came up with the idea of aging whiskey on barges and founded Brown Water Spirits in 2015. A year later, he experimented with his vision. In 2019, he obtained his DSP; the first-even one granted for a floating rickhouse; in 2020, the initial batches were ready.

“Motion – Our whiskey works harder than any other. The motion of the river keep the whiskey inside our barrels constantly churning, exposing more liquid to the surface of the barrel where it extracts more flavor from the wood.

Temperature – Our whiskey experiences large diurnal shifts (the difference in temperature between daily highs and lows). The heat from the daytime sun causes the pores in the wood to expand and absorb more whiskey. At night, the river pulls the heat from the barge causing the pores to squeeze the whiskey back into the barrel along with the flavors it has extracted.

Humidity – the humidity from the river keeps our barrels moist. Aside from slowing down evaporation of the whiskey (known as the Angel’s Share), the sugars in our barrels do not dry out in the heat, keeping a nice molasses-like consistency. This allows the whiskey to better extract the flavors from the wood.” – O.H. Ingram River Aged

O.H. Ingram River Aged’s portfolio includes a Straight Bourbon, a Straight Rye, a Straight American Whiskey, and a Flagship Bourbon. Today I’m sipping on the Straight Bourbon. It is distilled in Indiana utilizing the MGP/Ross & Squibb 51% corn/45% wheat/4% malted barley mashbill. It carries no age statement, which means there are at least four years of exposure to oak. Packaged at 52.5% ABV (105°), a 750ml bottle costs about $69.99.

Before I get to the #DrinkCurious part, I must thank Brown Water Spirits for providing me with a sample of this Bourbon in exchange for a no-strings-attached, honest review. Let’s get to it, shall we?

Appearance: I sipped this whiskey neat from my Glencairn glass. Inside, the liquid presented as deep chestnut and formed a thinner rim. That rim released wide, sticky tears that crawled back into the pool.

Nose: The aroma consisted of cherry, pear, freshly-sawn oak, and honeysuckle. When I drew the air into my mouth, I tasted lightly-toasted oak.

Palate: A thick, weighty texture crossed my lips and the front of my palate encountered cinnamon, vanilla, and orange rind. I found nut, honey, and apple flavors as the Bourbon moved to the middle. The back featured new leather, nutmeg, and toasted oak.

Finish: I first noticed how numb my hard palate became. There wasn’t any burn; it just numbed it like I visited the dentist. Leather, orange rind, and cinnamon spice remained to form a medium finish.

Bottle, Bar, or Bust: O.H. Ingram River Aged Straight Bourbon is an unusual pour. I’ll embrace that the sleeping whiskey was impacted by life on the river, and this isn’t a gimmick. This Bourbon is so off-profile for MGP’s wheated mashbill. I liked it, but I am not in love with it. When the price is considered, I will toss a Bar rating at it. Cheers!

Posted by Whiskeyfellow at 12:00 AM 2 comments: