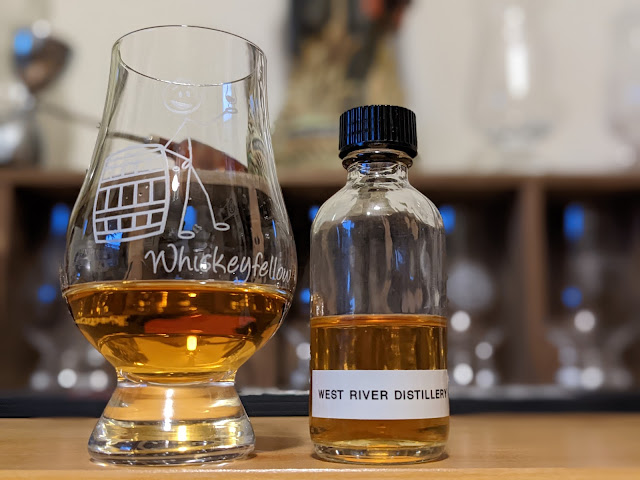 In Deadwood, South Dakota, there exists a distillery called West River Whiskey Co. Bourbon is the name of the game, and the owners are shooting for the moon. The Bourbon was released around Christmas 2021.

“West River Whiskey Co. is like the annoying (yet adorable) little brother to sister-store Madame Peacock's Beer & Bling. Originally from Mitchell, Tom and Julie Koth opened Madame Peacock's in 2012 after falling in love with Deadwood and the Black Hills. Almost a decade later, they partnered with Julie's daughter, Alex, and her husband, Joel, from Nashville, Tennessee to bring Main Street in Deadwood a so-far untapped (ha) concept.” – West River Whiskey Co.

It starts with that Indian corn, which per the distillery, it contains more germ, bran, and nutrients than your average #2 dent yellow corn. The grains are grown by a local fourth-generation farming family. It is distilled twice through a copper pot still, then aged in #3 new, charred Missouri Ozark White Oak oak casks. It is aged at least four years, and you can procure an 80° 750ml bottle for $47.99.

The whiskey is sourced from BlackFork Farms, an artisan distillery out of Brookings. However, West River Distilling Co.’s Bourbon is considered the Official Bourbon of Deadwood. A portion of every bottle sold goes to the Deadwood Chamber of Commerce.

A friend passed along a sample of this Bourbon and requested a review. Let’s #DrinkCurious and figure this one out.

Appearance: A neat pour of this Bourbon in my Glencairn glass suggested a light caramel color. A thicker rim released thick legs that fell to the pool like molasses.

Nose: Cinnamon powder, smoked oak, corn, and caramel rose from the neck of my glass. When I drew the air through my lips, the smoked apple and cherry wood stood out.

Palate: A thin, watery mouthfeel rolled over my tongue. The front of my palate discovered thick caramel and vanilla, while the middle tasted of toasted oak and corn. The back offered a soft pepper flavor to it.

Finish: There was something mildly sour on the back end, but I couldn’t put my finger on it. It wasn’t an offensive note; to be clear, it wasn’t some sour fruit. This Bourbon had a medium-short finish that featured smoked oak and light pepper.

Bottle, Bar, or Bust: I got excited with the notion of Indian corn over a standard #2 yellow dent and looked forward to the experience. Corn makes a difference, but in the case of Wild River Whiskey’s Bourbon, the 80° muted much of what was there. I believe it was appropriately aged; however, it requires more alcohol content to make the flavors shine.

It isn’t a bad Bourbon but isn’t memorable, which is a shame because it has potential. I’d love to explore this if it carries more weight down the road. In its present form, and running nearly $50.00, there’s just not enough value for the price, even considering the Deadwood Chamber of Commerce angle.