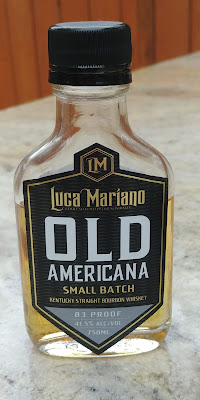 When you distill in your garage, you have some hurdles to overcome. Particularly legal ones. When Francesco Viola, a first-generation Italian-American, started distilling on his own, he had to cease and desist. Yeah, he found out what he was doing was not legal when his neighbor pointed it out, and then, when he didn't believe his neighbor, he talked to his lawyer. That was the end of his garage distilling operation.

Francesco then decided to do things legally and set up shop with Wilderness Trail Distillery in Danville, Kentucky on a contract-distilling basis. His backstory is his recipe is a blend of his grandfather's and modern-day methods of distilling spirits. One of Francesco's goals was to provide a whiskey that people could afford and buy repeatedly. He calls his whiskey Luca Mariano Old Americana Kentucky Straight Bourbon, which is named after his son, Luca Mariano, who, incidentally, is named after Francesco's grandfather, Mariano.

If you visit their website, the tagline states it is a Family-Selected Premium Whiskey. It is "Born in Italy and perfected in Kentucky." Of course, Bourbon is not born in Italy. But, it is a backstory that fits the image he wants to portray.

While the percentages of the mash are undisclosed, it is a Bourbon distilled from corn, rye and malted barley that is aged at least four years.  Once it is dumped, it is blended in small batches and then diluted to 83°. Luca Mariano retails for $44.99.  The batch I tried was 2019-03.

How does Luca Mariano taste? The only way to find out is to #DrinkCurious.

In my Glencairn glass, Luca Mariano appeared as a chardonnay color.  It left a medium rim and created medium legs that dropped slowly back to the pool of liquid sunshine.

An aroma of sweet corn greeted my nostrils. Underneath was light oak, apple, and grass.  Beneath the grass was an astringent quality.  When I inhaled through my mouth, it was a mixture of sweet corn and smoke.

The mouthfeel was very thin. The palate itself was as well.  Corn was prevalent, and at mid-palate, that astringent quality returned. It was followed by mint and char. All of that led to a thankfully short finish of black pepper and smoked oak.

Bottle, Bar, or Bust:  I understand the need to maximize cash flow, especially when you're first starting out. Even with contract distilling, things get very expensive very quickly. One way to do that is, aside from making vodka and gin, is to lower the proof as mild as possible while still retaining character. While I don't know what different proofs were tested before arriving at 83°, this was not the right choice, at least not for this particular batch. As I said in the notes above, the palate was thin. I've had 80-proofers that perform well, it can be done.  While I always want to see start-ups succeed, unfortunately, Luca Americana one needs a lot of tweaking and rework before it gets a positive recommendation from me. This one is a Bust.  Cheers!

Posted by Whiskeyfellow at 6:36 AM No comments: