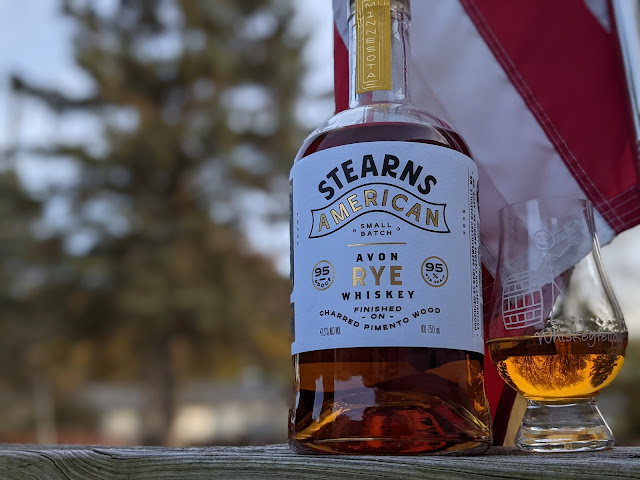 Are you familiar with pimento wood? You may be if you’re a fan of jerk chicken, beef, or pork. You see, in order for it to be considered “jerk”, it must be cooked over pimento wood. It is used for barbequing and grows primarily in Jamaica. Pimento wood comes from an allspice tree, of which the berries make the namesake spice. The wood is very hard, and, unfortunately, was placed just this year on the international endangered species list. As such, the only current legal way to obtain pimento wood is to harvest it from already felled trees. No live cutting is allowed, and Jamaica is already limiting its export.

Why am I giving you background on pimento wood? Because I just got done trying Stearns American Avon Rye, which is finished in – you guessed it, charred pimento wood. I can safely say I’ve never had a whiskey aged or finished in that before. I’m assuming you probably haven’t, either.

Stearns American begins with a mash of 95% rye and 5% malted barley. I know what you’re thinking – it is sourced from MGP. Well, I thought the same and we’re both wrong, it is sourced but not from them. The newmake is then aged for 21 months. Currently only available in Minnesota, the suggested retail for a 750ml package is $49.99, however, I’ve been told by Jeremy Blankenship, the head distiller, that some retailers are selling it for a buck or so less. He said that he gets so engrossed in the distilling process and loves hearing his still sing.

“STEARNS AMERICAN stands with free spirited people who live life on their own terms - like the people of central Minnesota who were responsible for the infamous and legendary whiskeys of the 1920's and 30's Prohibition era. The whiskeys were crafted by farmers in barns and cellars across the rural communities to help weather the economic hardships of the times. The call for 'free kittens' on the radio alerted the community to get the next batch of whiskey ready for market.” – Jeremy Blankenship

As I’m getting ready to #DrinkCurious, I’d like to thank Stearns American for providing me a sample of this Avon Rye in exchange for a no-strings-attached, honest review.

Appearance:  Poured neat in my Glencairn glass, this Rye was a light, orange-amber. It formed a thin rim that created sticky droplets that never really went anywhere.

Nose:  Dill was easily sniffed out. Beneath that were allspice, rye, dry oak, something slightly soapy, and a big blast of clove. As I drew the air into my mouth, dill and clove rolled across my tongue.

Palate:  The mouthfeel was oily and thin. The front of the palate started with caramel and mild peppers (I suppose it could be pimento, I’ve never had a raw one). The middle offered flavors of dill, cinnamon, and old leather. On the back, I tasted allspice, oak, rye spice, and clove.

Finish:  The finish was elusive. I don’t mean it wasn’t there, but initially, I felt it was medium in length. Clove, allspice, oak, and cinnamon stuck around for a bit, and then everything went away. But, the leather and mild pepper rose from the ashes and stuck around for several minutes on my hard palate, reminiscent of jerk.

Bottle, Bar, or Bust:  Stearns American Avon Rye was unusual in a good way. The nose was weird, particularly with that soapy note midway through. But I’m a fan of clove and that was the strongest clove influence I’ve ever come across in a nosing. The palate was also unusual in a great way. I enjoy pimentos in olives, but they’ve also been soaking in brine. I’m guessing some of what I tasted was raw pimento, but I can’t swear by that. Regardless, for $49.99, this is a heck of an adventure, and well worth my Bottle rating. Cheers!