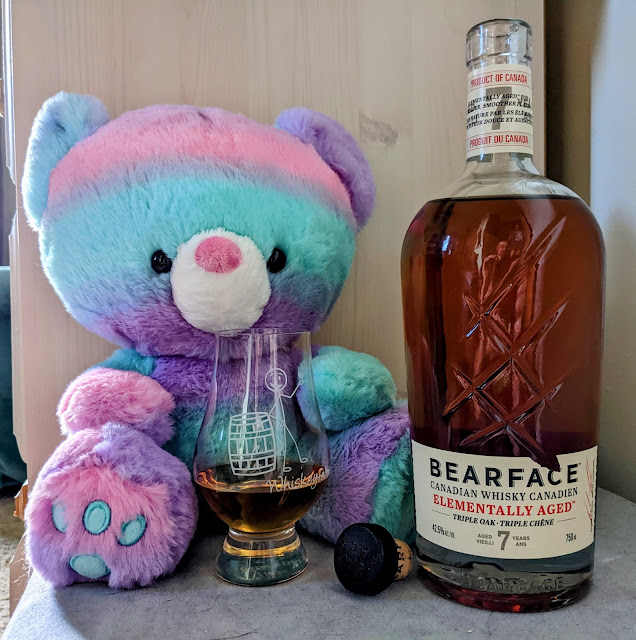 I never thought I’d say this, but after the recent success of a fantastic Canadian whisky I rated, I’m excited to try another! Another reason I’m excited to sip this whisky is that the distillery uses a unique aging process. No, this isn’t shooting music or microwaves at barrels or sending them around the world’s oceans on ships. It is something I’ve never heard of before:  Elemental Ageing.

“Elemental ageing is our unique process where hand-selected oak casks are matured in repurposed shipping containers and exposed to the elements in the Canadian wilderness. Our extreme northern climate amplifies how the whisky and wood interact, transforming the liquid inside for a bolder, smoother flavor.

BEARFACE is owned by Vancouver-based Mark Anthony Wine & Spirits. Master Blender Andrés Faustinelli was born in Venezuela, raised in Italy, is a citizen of France, lives in San Francisco, and creates whisky in Canada. He is experienced in beer, Bourbon, wine, and Mezcal. He chose Canada purposefully due to its more relaxed rules regarding whisky making.

It begins with single grain Canadian whisky made of 99.5% corn and 0.5% malted barley aged for seven years. BEARFACE Spirits openly states it is sourced; it doesn’t state from who. Its primary aging was spent in former Bourbon barrels. Over 100 days, it was finished first in three different vintages of French oak wine barrels, which held Bordeaux-style wines from Mission Hill for seven years. The whisky was then finished in toasted, virgin Hungarian oak barrels made from staves air-dried for three years. Bottled at 42.5% ABV (85°), it carries a suggested retail price of $34.99, making it easily affordable to most.  Mark Anthony indicates this can be enjoyed neat or in a cocktail. I opted for the neat pour.

Will BEARFACE Triple Oak Whisky be another Canadian winner, or will it fall by the wayside like many predecessors? The only way to answer that is to #DrinkCurious. Before I get there, I must thank BEARFACE Spirits for providing a sample in exchange for a no-strings-attached, honest review.

Appearance: A brilliant orange amber shined through my Glencairn glass. A medium-thin rim released thick, watery legs that raced back to the pool of liquid sunshine.

Nose: A combination of browned butter, caramel, orange peel, strawberry, and sweet corn lacked any evidence of wood. Inhaling through my mouth brought strawberries and vanilla that flowed across my tongue.

Palate:  I found the medium-weighted liquid held a silky texture. Coffee, chocolate, and caramel started the journey. Caramel continued through the middle, joined by vanilla and corn. French oak, strawberry, and rye spice formed the back.

Finish:  That rye spice built into cinnamon-soaked toothpicks. Dark chocolate and rich caramel faded to bold French oak; everything escaped with a gentle kiss of strawberry.

Bottle, Bar, or Bust:  I don’t know if it is the base single grain whisky, the French oak finish, the Hungarian oak finish, or those repurposed shipping containers that did it, but BEARFACE Triple Oak Whisky is easy to sip and generous on flavor, and it is just damned good. It earns every bit of my Bottle rating, and I’m thrilled to have this easy-on-the-wallet Canadian whisky in my library. Cheers!